I had the opportunity a few weeks ago to take a look at the new Schneider PC-Tilt Shift lenses at the Photo Expo here in New York. Due to hit the stores sometime next year are a 50mm 2.8 PC-TS Super Angulon, 90mm 4.0 PC-TC Makro Symmar, and a 120mm 5.6 PC-TS Apo Digitar. The latter is for the Mamyia/Phase system, the first two are for full frame DSLR cameras. Why the excitement, when there is no wide angle version? Most photographers think of using perspective control and tilt shift with a wide angle lens to help eliminate distortion and keystoning in architectural photography. Perhaps Schneider was thinking that these corrections are now so easily done in Photoshop that there’s no longer a market for the wide PC-TS lenses. Last year Canon did come out with an improved 24mm and a new 17mm PC-TS lens to add to their line of a 45mm and 90mm PC-TS lenses. And Nikon also has their set of 24mm, 45mm and 85mm PC-TS lenses. 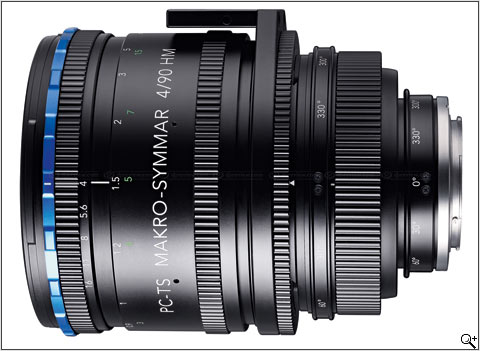 I’ve been using my Canon 90mm PC-TS the last few years to get better depth of field when shooting objects on an angle or a line of objects, which is the lens’ great advantage. And the new Schneider 90mm lens is also a macro lens, so you can use it on small objects and really pull in the depth of field. It’s an odd macro, as it only has a 1:4 magnification factor not, what I would consider ‘macro’. I was told that the lens is meant to be used with extension tubes, which of course don’t use any glass and just pull the lens further away from the sensor, giving close focusing ability.
I’ve tried to use my Canon 90 with extension tubes and it was a disaster. I was photographing dinosaur skulls in China and on the larger skulls I was able to shoot on an angle and hold depth of field from front to back using the tilt of the lens. However, when I had to shoot small skulls and needed to get in closer, the 90mm lens with extension tubes was not very sharp. I had to use my 100mm macro and reluctantly change my composition to get better depth of field, but no quite the aesthetic I was looking for.
I am hoping that since Schneider is calling their 90mm a macro lens, it has been designed to be sharp at the close focusing range. I’m in line to try out a prototype and will update you after I spend more time with it.
The other nice things about using the longer tilt shift lenses is that you can tilt to make areas go out of focus and the in focus areas have the ‘toy’ look to it, a technique used by some photographers. Also, though not the best way to do a panorama, you can shift the lens a bit, do a new frame and stitch that into a final panorama series.