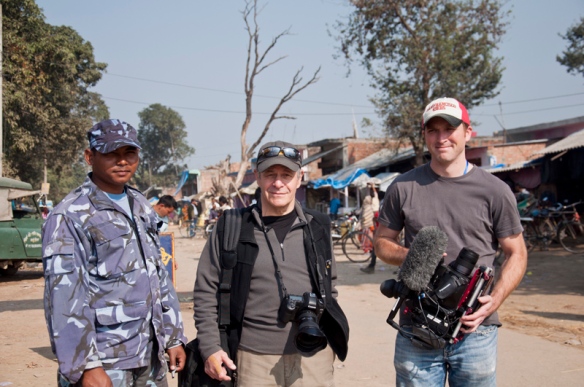 As a National Geographic Photographer, one of the first questions I’m asked when I meet someone new is, what countries have you been to? For years, my standard answer has been that it would be easier for me to name the countries where I haven’t been. Everyone is surprised to hear that India is one of those places. I just have never had an assignment there. Currently I am in Lumbini, Nepal, about 13 kilometers from the Indian border. Today I decided that it would be a good time to at least step across the border and maybe even get an Indian stamp in my passport.

In preparation, I consulted some local Nepalese who told me that this particular border crossing was so small that I couldn’t get a visa. The closest crossing where I could apply for one was an hour away and it would take at least a day for the visa to be processed. Neither having the time nor the inclination to wait 24 hours for a visa, I decided to take my chances at crossing the border at New Buddha Nagar, Kalidaha, Nepal.

My local assistant Suraj Shakya and Neil Gelinas, the producer/camerman from National Geographic Television who is working on the same project with me in Nepal, were going to accompany me on crossing into India. As we got closer to the border, the villages began looking extremely poor. Trash in the street, skinny dogs and oxen, dirt roads and profound odors. When we finally arrived at the Nepali border, we could see Siddhartha Nagar, India fifty meters away. Neil, Suraj and I walked towards the border police. We were ordered to stop and since Neil and I were Americans who didn’t have Indian visas, we were forbidden to proceed towards the Indian border station. We were also admonished not to take photos in the direction of the Indian border. Suraj didn’t have this problem. As a Nepalese citizen, he doesn’t need a visa or a passport to travel between Nepal and India.

Although I tired my best to convince the police to let me cross, nothing worked. So when people ask to what countries I’ve been, I still have to answer that I’ve never been to India.

1 thought on “India – Does Close Count?”