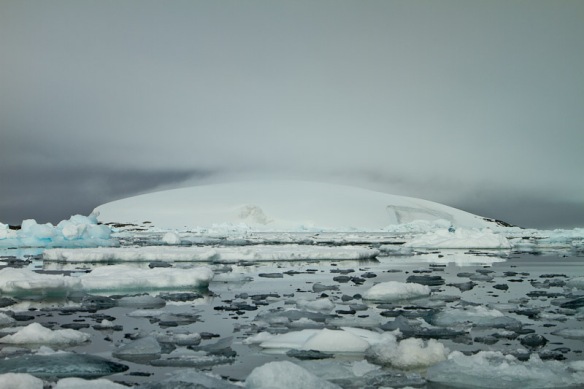 I know everyone is now backing up their digital images in many different places (at least I hope so), but what about camera backup? I’m leaving Antarctica, heading back to New York down one camera body, my fault for not respecting the limits of my equipment. A few days ago I was photographing penguins and icebergs in the rain, a mild rain. I kept on shooting until my Canon 5D Mark2 stopped working and came up with an Error 20 message. I had used this camera many times in the past in the rain and had encountered no real problems. And although I had a rain cover for it in my backpack, I did not bother to cover the camera. Was I being lazy or did I just have too much confidence in the camera’s weather resistance. And when is a photo worth losing a camera?
When I returned to the ship I took out the battery and CF card and left everything open. I put the camera in a plastic bag with desiccant, hoping it would dry out overnight but the camera still wouldn’t function the next morning. Fortunately I had a backup camera, a Canon7D. The 7D was out in the rain with me when the 5D died but it continued to function.
As I am headed out to Abu Dhabi a week after I return to New York, I sent Canon repair an email to ask if they could fix the camera and get it back to me asap. Their answer was yes. I decided to push the envelope a bit with Canon: as long as I was sending the disabled camera in for repair, I thought I’d send the 7D and another 5DMark2 to be checked. I also wanted Canon to install the new mode selector locking mechanism on all three bodies. When you’re working with gloves and heavy clothing, that dial seems to mysteriously turn from your original setting to one that you’ve never heard of. And even though I don’t anticipate wearing cold weather gear in the desert, I want to ensure that the mode selection dial doesn’t inadvertently move when I pull a camera out of my bag.
If you are going somewhere special, on holiday and especially on assignment, respect your equipment. If you don’t, be prepared with some backup.

4 thoughts on “Back Up Your Camera”